the q continuum #one

dead (g)end(er) presents 'the q continuum': a weekly post about those who are affecting current outlooks on progressive thinking in our world :)
tqc #one: Gene Roddenberry (a.xix.xxi - o.xiv.xci) 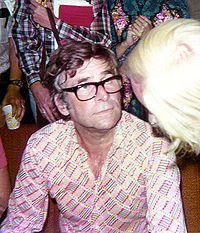 I spent quite a damn long time considering just who or what would be the best way to begin this weekly series. I was caught between a few visual artists and writers who have had a more personal influence on me and my work, but I wanted to go more Universal (sci-fi pun intended).
While I was recently watching the behind-the-scenes interviews with the actors and writers of the newest Star Trek film (a completely recommended watch), a name kept popping up for a moment of homage and endearment... I'm sure there is not a single child of a serious trekkie (or trekker) who has not heard the name Gene Roddenberry, but if you have never had the pleasure of watching the series', Roddenberry was the writer, producer and general mastermind behind the sci-fi epic Star Trek.
Roddenberry was internationally known as a 'futurist' (someone who is able to envision and explain the possibilities future developments may bring).
Star Trek is much more though than simply an 'educated guess' of future human events. The show, even Star Trek: The Original Series (TOS), was Roddenberry's attempt to inspire social enlightenment in the people of his generation. TOS, debuting in 1966, had its fair share of socially regressive aspects (the ladies' uniforms only ever seeming to come in extra-small, extra-short dress sizes), but Roddenberry still did his best to fight for as much progressive thinking as he could.
Interestingly enough, before Gene finally chose the more action-oriented, lady-charming character of James T. Kirk to captain the starship Enterprise, Roddenberry had actually written two previous male characters for the role. The producers, however, felt both of these original leading men were too intellectually based and not entertaining enough to carry an entire show. (Source)
Among a host of great moments, The Original Series is known most historically for the episode "Plato's Stepchildren" (1968), when Captain Kirk and his Communications Officer, Lt. Uhura, share television's first interracial kiss. I should note that many fans and non-fans have pointed out that this kiss is not as 'progressive' as it may seem at first glance, as Kirk and Uhura are both placed in a hypnotized state, causing them to act against their respective wills. Even though I understand such criticism completely, I have to say that featuring an interracial kiss at the time was not seen as a casual subject: Roddenberry and his writers unfortunately had to build a story-line to 'explain' its occurrence, but the episode is still worthy of introducing a radical new ideology to its 1960s fans.
Since the completion of TOS, there have been four major follow-up series in the Star Trek Universe and multiple films to compliment. Each new series brought with it a wave of new social issues to question and conquer: the first African-American Captain of Star Trek: Deep Space Nine (DS9); the first female Captain of Star Trek: Voyager.
One of my favorite stories is of how Roddenberry, wanting to challenge the future of gender roles, decided that Star Trek: The Next Generation (TNG) would feature male crewmembers aboard the ship wearing skirt-type uniforms. Backlash from the producers quickly squashed any of Roddenberry's visions to have the male actors in feminine attire, but noticeably, the women of TNG were also not seen in dress uniform any longer, a complete reverse from TOS. Instead, all of the TNG crew, male and female, are seen in conservative outfits covering the entire body.
*upon researching the above incident online, I stumbled across a hilarious forum discussing Roddenberry's choice to have male crewman in dress-uniforms (of which was actually featured in the first three TNG episodes). You can click here to read the thread of posts which give a bit of insight into what exactly Roddenberry was up against in striving for a more progressive attitude on the show (one post even suggesting the 'dudes in dresses' are perhaps the result of the Federation's losing a bet with the Klingons ...)
This was not Roddenberry's, or Star Trek's, last attempt to consider just what will become of 'gender' or 'sexuality' in the future. A few memorable episodes exploring the topic:
An overwhelming amount of fans still feel much more can be done with gender on the show. Roddenberry was always quoted as wanting to do more about the subject on Star Trek, unfortunately passing away before seeing such change in 1991. Personally, I believe the latest of the series', Star Trek: Enterprise (2001), was a complete flop due to the fact that it offered nothing original (or interesting, I might add). The next series, whenever and whatever that may be, cannot ignore the demands of its fanship.
In the meantime, Trek fans have taken to creating their own pieces of Star Trek fiction that gives them the edge they're looking for-- whether it's writing fan-fiction or slash-fiction, or even going so far as to create an online series themselves, which Rob Caves did in 2000. Caves' show Star Trek: The Hidden Frontier (THF) deals with multiple modern age questions, but, "it also dealt with the complex romantic triangle between three of its prominent characters, all of which are male." (Source) The online show started before the main-stream Enterprise and THF is still continuing long after Enterprise, which just goes to show the drive for a fresh take in the Star Trek Universe. (If you're interested in THF, you can watch the episodes on their website, hiddenfrontier.com)
Gene Roddenberry was called The Great Bird of the Galaxy.
His vision of the future was one of knowledge seeking, of acceptance, and of understanding.
'the future begins.'