the monster colourfully referred to by media sources as ISSUE TWO-- which has been on the loose from Southern Ontario's travelling sideshow dead (g)end(er) since the end of May-- has been CAPTURED.

after many phone-in tips and exhaustive searches, officials have confirmed the end of the ISSUE TWO fiasco.

the beast became trapped just a few short hours ago when it tried to slither through the tight drain-pipe of a home somewhere in Grimsby. the house owner, who's asked to remain anonymous, had this to say: "it-it had skin like-like yellow concrete... and two great black holes for eyes!... eyes that were trying to eat my soul... an-and luckily I was carrying my pocket-sized mirror with me-- which I knew was the beast's only weakness from the news-- and when I showed it, its reflection, the monster burst into a million shards... scariest moment of my life!"

to the great frustration of investigative officials, the remains of the monster have had to be returned to the owners of the dg sideshow.
exactly how the beast came into the possession of dg in the first place remains unknown. one of the more... eccentric owners of the sideshow-- known only as Cahoots-- had little sensible information to offer at the scene, saying, "the monster was a thing of great evil! its body was to be-- and will be now-- used for the greater good: melted down into works of art!"

officials are in the process of investigating more about the monster's escape this week, and should have more answers for the community by the end of the weekend.


a sketch artist's composite of the monster: 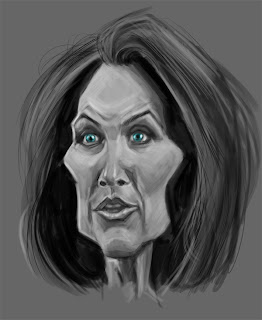