the Niagara Migrant Hunger Strikers Support Fund is holding a night of music tonight at Rise Above Restaurant (120 St. Paul Street, St. Catharines) to help raise money for their future plans!
the event is pay what you can-- no one will be turned away for lack of funds-- and there's a suggested donation of $10!
the music artists will include Matt Sajn, Eric Smith, and Jaimie Godard!


come on out for good tunes, friends, and treats :) 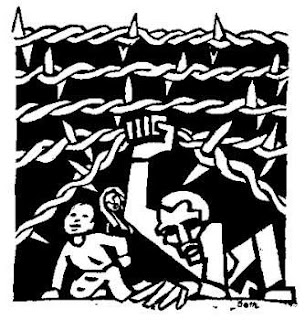 here's the Niagara Migrant Hunger Strikers' story:
"Sergio Puerto, Sandro Philippe, Jesus Galban, Ibrahim Ali Farrah and Victor Moses refugee claimants from Latin America and the Caribbean and Southern Africa have been jailed at the Niagara Detention Centre for between 3 to 6 months. Other then 10 minutes a day in a concrete yard - they have been locked up without community support.

In mid-November, they began water-only hunger strike demanding that their release be expedited and that they be moved to Toronto where they hope their files will be processed quicker. On November 23, Jesus Galban, fell off his bed and was denied medical aid until they ended the hunger strike. Officers from Canada Border Services Agency promised immediate action on their file. Since then Victor Moses has been moved and they have not been informed of his whereabouts.

- That the inmates be immediately transferred to Toronto where they believe their cases will be quickly expedited and where they all have family and community support.
- That Citizenship and Immigration stop delaying justice by keeping all immigration detainees an unreasonably long time in detention for no reason.
- Immediate medical assistance for: Jesus - had an accident on November 23rd. Fell off a six foot bunk that had no ladder. Back severely injured and no doctor has attended despite repeated requests. Only medication given so far to relieve pain is Tylenol. Sandro also having problems with his back- slipped and fell (water on floor) in mid November. Has still received no medical attention.

Canada Border Services Agency has given endless excuses for holding these men. They claim that they are flight risks, even before some of their refugee claims have been processed. Some are facing deportation because of criminal convictions in Canada and the United States even though they have already served their sentences - a clear example of unjust double punishment. Attempts by community members to act as bonds-people and even put up financial sureties have been rejected.

Faced with lack of information, and continued lies by Canada Border Services Agency, Sergio, Sandro, Jesus and Ibrahim have decided to initiate a hunger strike. It is critical that we support them. Please take a minute to write an email or call Richard Comerford, Regional Director General of CBSA and insist that their demands be met."

the Niagara Migrant Hunger Strikers Support Fund will be organizing actions in St. Catharines, Niagara and Toronto. you can toss them an email at: nmhssn2011@gmail.com
Posted by dead (g)end(er) at 3:26 PM