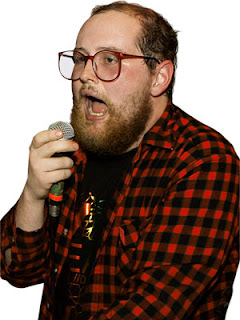 "Hi. I'm Dan Deacon. Before moving to Baltimore I went to college and grad school at the Conservatory of Music at SUNY Purchase. For the past four years I have been touring a collection of pieces for voice, electronics and audience. In my spare time I enjoying booking shows at various weird places in Baltimore. I'm looking forward to touring less and finishing up a series of pieces for large ensemble. The future surrounds us. Let us begin." (Source.)

while some would categorize Dan Deacon under the more general heading of 'musician,' many of his other fans recognize him as more of a 'sound artist'. infamous for his interactive shows-- creating giant dance circles with his audience, and even having friends dressed in masks running through the crowd-- Dan is an innovator of the performing arts. his work has been slotted into countless genres: underground, indie, experimental-folk, electronica, polka-punk, etc. -- but let's just dub him 'awesome,' shall we?... and I will try to prove why in the next few moments.

if it's possible to take the Fauvism art movement's exploding use of colour and brush-stroke, mix it with the sounds and vibrancy of a 1980s video arcade, and pair those alongside the precision of ear and mind possessed by Milton Babbitt-- translate all this into music, and you get: the style of Dan Deacon. he is 'eclecticism' in full form-- limitless in his music and performance.

let's take a look at a bit of his musical evolution since his first albums Meetle Mice and Silly Hat versus Egale Hat (released on the same date in 2002 by Standard Oil Records). Before we go right into one of Dan's songs, I'd like to first introduce you a tad more to Milton Babbitt-- an infamous composer, having written scores for twelve piece orchestras, and being one of the first artists to begin using the Synthesizer to create music.

you don't have to listen to the entire second-half of his 'Ensembles for Syntesizer' piece (1964), the first minute-and-a-half or so will give all the insight you'll need:


now, below is one of Dan Deacon's first songs, 'Never Do That (Mars)' (2002), where we can immediately see just what effect the sound experimentalists of the fifties and sixties had on Dan and his music:


four years away from 'Never Do That (Mars)', Dan's technique takes a jump from the more minimalistic, to the more complex with the addition of more instruments and even lyrics. (A good example being the song 'Splish Splash' from Acorn Master released by Psych-o-Path Records in 2006.)


I also wanted to show you 'Crystal Cat' as it introduces the name Jimmy Joe Roche (the director of the music video). Roche, a video-artist and filmmaker, has collaborated with Deacon on several projects-- one of the largest being the film-piece Ultimate Reality. "The simple source material [of Ultimate Reality] (entirely derived from various Schwarzenegger films) quickly builds up, through endless mirroring, layering, chopping, and re-touching, into a kaleidoscopic tapestry of kitsch." (Source: a highly recommended read if you're interested in learning more about the project.)

Roche and Deacon are also both members of Wham City: "... a group of independent artists linked by the bonds of friendship. We join forces to collaborate, we disperse to collaborate with others . . . We have no set group aesthetic, focus, or member roster. Our work as individuals represents us alone . . . We make art shows, theater performances, music shows, festivals, books, computer networks, fashion shows, email lists, etc. . . . Our goal is to create and support an artistic community while honoring our individual voices . . ." (Source: their website has A LOT of awesome projects to see and people to learn about!)

Deacon, having had a bit of time to work on some personal projects (his last album Bromst was released in 2008), is teaming together with L.E.M.U.R: the League of Electronic Musical Urban Robots (... I kid you not). The sound art group L.E.M.U.R has created "computer-controlled mechanized acoustic musical instruments which can perform music by and with human musicians . . . [Examples being the] slide-guitar-like GuitarBots, assorted percussive ModBots, XyloBots, water-based HydroBots, fire-based PyroBots, the Indonesian-inspired GamelaTron and others." (Source.) WICKED. You can check out one of their installations here.

I salivate just imagining what kind of awesomeness will come of Deacon's experimentation with the L.E.M.U.R bots! You can check out more about L.E.M.U.R, and actually donate to help out their mission on their website.

Dan Deacon helps to push the creative boundaries of sound and visual art by mixing, questioning, blurring, and reinventing every form of media imaginable, or yet to be imagined :)

(You can see my favourite Dan Deacon song and video, 'Paddling Ghost', from the Bromst album here.)

Deacon's website is pretty good at keeping you up-to-date, so if you were into anything you read above, you might wanna check it out: http://www.dandeacon.com/

Stay tuned for the fourth edition of the q continuum series on Friday, February 25th! dead (g)end(er)'s own Piero Manchego-Badiola will be taking a look at the independently run webcomic series Hark! A Vagrant by Kate Beaton.