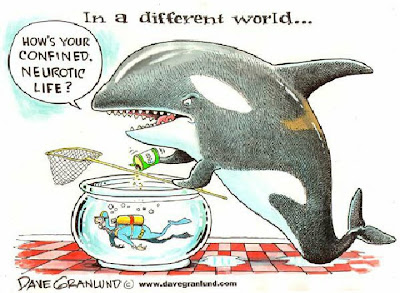 Niagara Falls, Canada, is home to plenty of gross, overly-priced, worn-out attractions﻿, but none takes the cake quite like Marineland.
this marine 'attraction' charges (before tax) $41.95 PER ADULT (which they consider 10 years old and over) and $34.95 PER CHILD for about five or so 'rides'-- all terrible; but besides the total waste of your money, Marineland is a total waste of your conscience:
the owner of Marineland, John Holer, has made his living off caging both marine and land animals such as whales, seals, belugas, dolphins, bears, deer, etc., not taking proper care of them, and then making the animals perform silly tricks for our supposed 'amusement'.
well, Mr. Holer... we're not amused.

(oh, by the way, as a side-note: did you know John Holer recently evicted everyone living on his Stanley Avenue trailer park land-- with barely any notice-- just so that he can build a Marineland maintenance building? the eviction cost people their money, homes, and in one case, a resident's life. you can read more about that on the Welland Tribune.)
The Canadian Federation of Humane Societies (CFHS) "and Zoocheck have supported their submissions to the Department of Fisheries and Oceans with an abundance of scientific and technological information about the biological and behavioural deficiencies of captivity for cetaceans, with specific concerns about Marineland's facility.
Whales are highly social animals that develop strong family bonds and travel vast distances, including diving deep into the water. CFHS does not believe it is possible to create a captive environment that could adequately meet their biological and behavioural needs." (Source.)

if you'd like to learn more about the stats and exact numbers of animal deaths at Marineland, click here!

so, what can we do about it? we can join Marineland Animal Defense (M.A.D) :)
M.A.D is "a campaign of concerned citizens determined to end animal captivity at Marineland." Their goals are to: "End breeding programs at Marineland. End plans for expansion of animal captivity. Remove captive animals to Sanctuary sites. Hold Marineland and John Holer accountable for various abuses, human and non human." (Source.)
M.A.D has been holding protests against Marineland every couple weekends of the 2011 summer, in the hopes of ending the animal cruelty that goes on there.
all are welcome to the protest demonstrations! whole families of animal lovers-- even little tykes-- have flocked to protest Holer and his park.
you can make your own signs, or feel free to borrow one of M.A.D's!
some of my personal favorite sign slogans:
"You have nicer things to do."
"Whales belong in the ocean."
and "PLEASE DON'T SUPPORT CRUELTY."
you can find free parking for the demonstrations in Dufferin Islands Park, right across the street from the main gate of Marineland (7657 Portage Road, Niagara Falls, Ont.).
the demos usually begin at noon, but you can keep up-to-date on specific times by visiting the M.A.D tumblr, or joining their facebook group! (the facebook page is also good for finding rides from the surrounding cities into the Falls!)

not in the area, but still want to help? to find out more about making a donation, you can contact M.A.D through marinelandanimaldefense@gmail.com :)
HELP MAKE 2011 THE LAST YEAR AN ANIMAL WILL EVER HAVE TO SUFFER AT THE HANDS OF JOHN HOLER AGAIN.
v live long, prosper, and be kind to animals v
Posted by dead (g)end(er) at 7:53 PM