(created by Banksy in London, UK.)

before I dive right into some of my research findings on street art, I feel we should attempt to define some of the other terms that are often confused with this artistic phenomenon:
firstly, I'd like to establish that vandalism tends to be seen as the mere destruction of property (e.g. kicking over a neighbor's mailbox)-- the intention being only senseless damage.
graffiti-- coming from the Italian word graffito: to scratch, carve or chip into-- is more 'artistic', and much more interesting from a socio-anthropological standpoint in comparison to vandalism. (although, vandalism can be pretty complex and intriguing when performed out of political activism.)
graffiti is largely public-- located on the sides of trains, on building walls, sidewalks, etc. the common tools being spray paint or chalk.
street art has become the larger, sort of 'more professional' form of graffiti-- introducing repetitively used/quickly recognizable stencils, and a multiplicity of paint colours to their work. to give you more of an idea about what I mean by 'more professional': some entire cities, or even countries, have come to embrace street art as a national sign of artistic talent, and host nation-wide contests to encourage artists. (if you're interested in learning about any such programs, you might wanna check out the Street Artists Program, or the NYC Street Artists.)
*I'd like to point out that none of these definitions are rock-solid, and each one has more than just a slight tendency to blend into the others. if you decide to continue researching the topic, you'll often see different sources referring to one as another and vice versa.

evolving over centuries as cave paintings, the Egyptian hieroglyphics, and even some acts of vandalism, street art has now come to represent an entirely new movement.
depending on the cultural and political acceptance of the style, street art pieces tend to range from practically unnoticeable, to absolutely enormous: 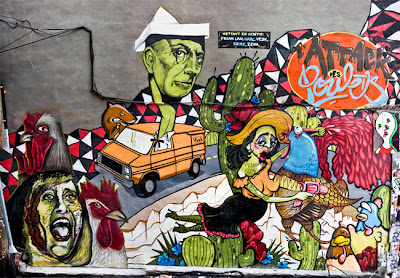 (created by Narc in Montreal, Canada)
so, when did street art really explode into popularity?
﻿well, I would probably have to take you back to late 1970s/early 80s Brooklyn, New York, when troubled (but brilliant) neo-expressionist artist Jean-Michel Biscuit teamed up with friend Al Diaz to create the first 'well known' graffiti group, SAMO©. (the name originating from Diaz's and Basquiat's high-school comic strip.) (Source.)

the reason I must mention Basquiat is because he has also become known as the inspiration for UK born artist, Banksy, (beginning in the early 90s,) who took the aspect of street art and graffiti to the next level. Banksy's pieces are dark-humoured, politically driven, and often of striking design.

Though, he does have a lighter side as well:

("This looks a bit like an elephant.")
Banksy 'glamorized' street art, if you will; though, many of his fans claim he's 'sold-out' a bit since his earlier graffiti career by now accepting cash payment for his street pieces. "Banksy’s signature stencils of kissing coppers, flower-chucking terrorists and mischievous rats found on doorways and side streets have become so sought-after that they are being chipped out of walls and sold for ludicrous sums." (Source - a recommended read if you're into learning a bit more about street art's historical evolution.)
Besides street art, it might be of interest to mention that Banksy has also gained some attention for his film, Exit Through the Gift Shop (2010), which was nominated for Best Documentary at the Academy Awards in 2011.
the film centres itself around French street artist, (and 'rubickcubist',) Invader, who uses the classic video game Space Invaders as inspiration for most his work!
if you're into cubism/80s video games/just generally freaking cool art, you should-- nay, HAVE TO-- check out photos from Invader's exhibit at the Jonathan Levine Gallery in New York City here.

although street art has been embraced by many larger metropolitan cities, (Vancouver, Toronto, and Montreal amongst the most popular Canadian spots,) i feel smaller towns would also benefit from the movement's creativity and originality.

Before I conclude with some cool examples of other up-and-coming Canadian and international street artists, I'd like to recognize the use of the pseudonym. in my research, I rarely ever encountered an arist who used her/his 'birth name', which might at first imply a sort of fear of legal persecution or punishment, but i believe the pseudonyms act more like the superhero alter-ego-- the artist is able to create an entirely new persona/public character free from the boundaries of her/his 'everyday' identity.
Ollio & Ekta, Gothenburg, Sweden:﻿ 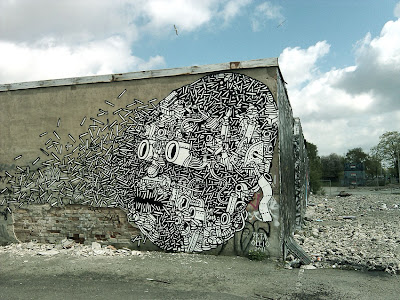 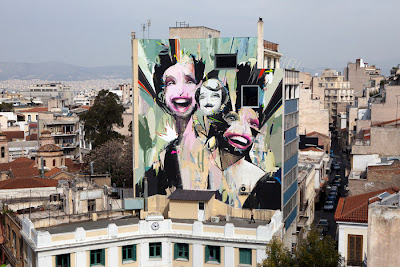 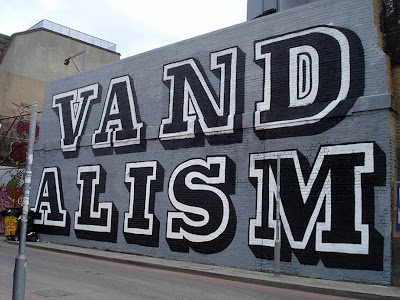 "Eine is in love with typography. Over a few years he has transformed Hoxton into a giant sentence..." (Source.) 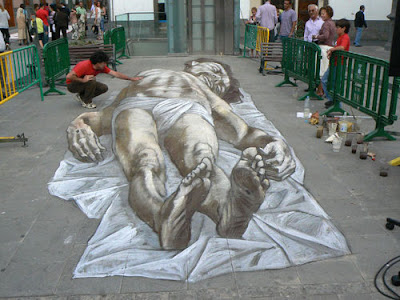 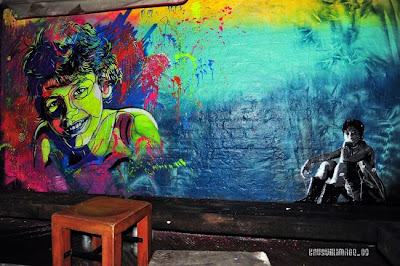 I know most people have been guided away from wikipedia, but the article on street art is actually really well researched, and informative! you can check it out here.
I also found Web Urbanist really helpful with some of the history of street art!