this past Sunday, August 21st marked the fourth anniversary of the Toronto underground art fair known as Zine Dream!

this was my first time attending ZD, and having read a description of the event weeks before-- "Zine Dream is an annual small press art fair featuring over 50 vendors of self published books, comics, music, zines, hand made crafts, prints & much more! Featuring music by Fresh Flesh, Skull Bong, Moon Wood and DJ's Laura Mccoy, Val Uher & The Boogie Woogie Mix Tape Library. Plus performances by Kathleen Phillips and Amelia Ehrhardt." (Source.)-- my imagination ran wild, and I was not at all disappointed at all!

as soon as I stepped into to the Tranzac (just off Bloor W. on Brunswick Ave. in Toronto), my eyes dove into the first few tables of neon skulls, cassette tapes, t-shirts, art prints, and my attention was eventually captured by Raymond Biesinger's table of illustrations. 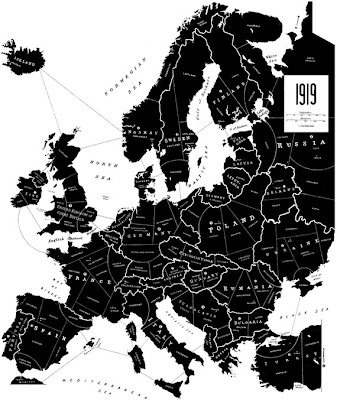 one colour on silkscreen. (order it here.)


Biesinger, who's from Montreal, Quebec, told me a bit about himself and the band he plays in called The Famines -- of which he wrote the art book, 'A Visual History of The Famines'.

as I made my way into the main room of the Tranzac, I found everything from home-made stuffed animals to home-made spices.

I also happened to find the good people of twelveohtwo - a radical D.I.Y zine distributor originally from Edmonton, Alberta which is now based out of Toronto, Ontario. 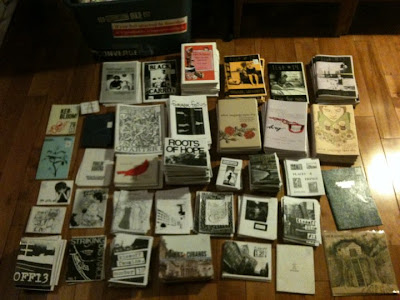 a photo from twelveohtwo's trip to Montreal for Expozine. (Source.)

although twelveohtwo told me they typically only sell things in-person at zine fairs, they will do mail orders, as well! contact them at to2@gmail.com <- which is also the email you can send zine submissions to twelveohtwo for their consideration - check out their facebook page!

walking around the Tranzac and hearing about the level of work that goes into detailing each and every zine was amazing. I was particularly blown away by Marta Chudolinska's linocut pieces. (linocut is a design carved out of a block of wood or linoleum.) Marta made ninety different black and white linocut carvings for her book Back + Forth (The Porcupine's Quill, 2009), which you can read more about here! and you can order Back + Forth here. 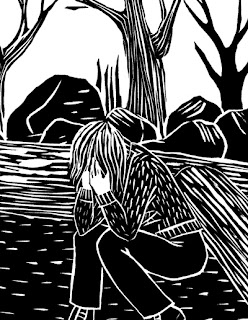 a page from Chudolinska's Back + Forth (Source.)

as a person who loudly exclaimed, "I love making new friends," multiple times during Zine Dream, it's not a secret that I like meeting new people; but, ZD also allowed me to meet up with a couple great artists I had always heard about, but never had the opportunity to talk with in person.

one such writer was Mark Laliberte, the Managing Editor of Carousel (an excitingly hip art and lit magazine from Toronto, Ontario), and author of BRICKBRICKBRICK (BookThug, 2010): 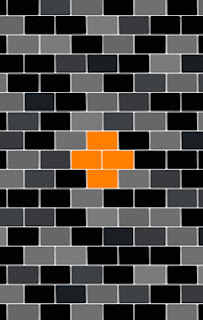 BRICKBRICKBRICK is a visual exploration of poetry's outer limits; a reconsideration of the term 'poetic'. Laliberte creates a really stunning series of pieces! you can order it here. and if you're interested in learning a bit more about Carousel, you can check out their website, and submissions guidelines.

another great encounter was with the radical indie artist Mark Connery! amazingly, I was able to pick up his latest work, (published only a month or two ago,) Melamine Car Bomb (Half World Books, 2011): "The first in a series of books dedicated to rescuing lots of neglected Canadian Arts." 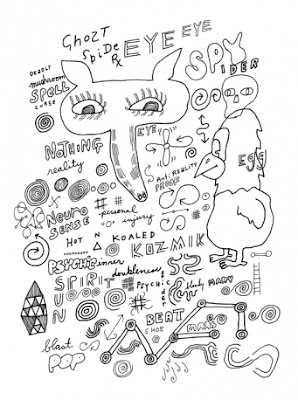 I'd heard of Connery's art from a couple friends around Southern Ontario, but until picking up Melamine Car Bomb, I didn't realize the full extent of his awesomeness. the book's editor, Marc Bell, writes, "Mark didn't really give a shit if this stuff he was making would sell or if he could make a living at it. He didn't even try to sell, he would just give the books away for free or sometimes stick them or the original drawings under somebody's windshield wipers." it's always about the art, and never the profit.

I highly recommend you check out Melamine Car Bomb, which you can order here!

I was so impressed by Zine Dream 4 that I exceeded my spending limit by three times, har har, I'm broke! we'll keep you updated on Zine Dream 5, and dg's hopeful involvement :)

some other cool people you might wanna check out:
gillian blekkenhorst (sketches / illustration / typography)
No Fun Press ("an independent publisher based in Toronto, Canada ... [focusing] on hand-crafting quality artist zines and other limited editions for young explorers and creative thinkers.")
Leanne Prain's Hoopla: The Art of Unexpected Embroidery (which launches on September 27th at Type Books - 883 Queen Street West).
Marta Ryczko (an illustrator, crafter, zinester)