a submissions call for a Trans/Genderqueer anthology!

hey, dg, can I ask you somethin' first?... what does 'genderqueer' mean?
ah, good question! being 'genderqueer' means being able to understand that 'gender' is not tied down to the words 'male' and 'female'; that there are as many genders as there are people on the planet.
'genderqueer' can refer to people who identify as both male and female, people who identify as neither male or female, people who identify as their own separate third-gender, etc.
genderqueer can also refer to the recognition that not everyone can so easily fall into the growing abbreviation 'LGBTQ'; that sexuality, like gender, cannot be categorized by a single word-- or letter.
TC Tolbert-- feminist poet, and author of Gephyromania, a forthcoming Ahsahta Press publication-- and Tim Peterson-- curator of the queer-talk series TENDENCIES: Poetics & Practice, and editor of EOAGH: A Journal of the Arts-- are calling for trans(beyond)gender poetry that will be compiled and eventually published as a genderqueer anthology.
(this would be the first ever anthology by genderqueer and trans writers that would focus on a variety of identities and writing styles.)

Tolbert and Peterson write, "Our assumption is that the writing of trans and genderqueer folks has something more than coincidence in common with the experimental, the radical, and the innovative in poetry and poetics (as we idiosyncratically define these categories), and with your help we’d like to manifest that something (or somethings) in a genderqueer multipoetics, a critical mass of trans fabulousness." (Source.)
the anthology will also offer published writers the opportunity to write a 'statement on poetics' (which you can submit along with your poetry). the editors detail, "tell us something about your writing process, writing practice, theory of life, or whatever you like. It might include the relationship of the body and text, or the practice of reading and misreading text and the body, or locations, connections, and divisions of the self amongst text and the self amongst other bodies or…you get the point." (Source.)
this is a very exciting project for trans folks and the genderqueer community at large!
SUBMISSIONS DEADLINE IS NOVEMBER 30th, 2011
you can submit 7-10 pages of poetry, and your prose 'statement on poetics' to trasnanthology@gmail.com
Tolbert and Peterson are set to edit the anthology which will be published in early 2012 by EOAGH Books.
for more info, check out the transanthology website! 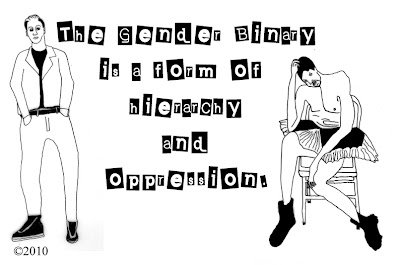 (Source.)
genderqueer (jen-der-kweer) v.
the action of kicking stereotypes in the ass.
v GENDER'S DEAD, HAVE YA HEARD? v
Posted by dead (g)end(er) at 12:41 AM