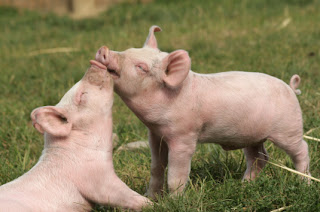 Farm Sanctuary (FS)-- founded in 1986-- is a non-profit organization dedicated to the rescue of neglected and abused farm animals. Farm Sanctuary advocates for animal rights and human compassion, setting out to educate the public about what 'really' goes on the industrialized farms where meat and dairy are produced.
FS writes, "We started out by visiting farms, stockyards and slaughterhouses to document conditions, and we found animals literally left for dead. Hilda, a sheep found on a pile of dead animals behind Lancaster Stockyards, was the first animal to be rescued by Farm Sanctuary. She lived with us for more than a decade, and died of old age." (Source.)
since their start as an all volunteer-based group, Farm Sanctuary has become a full blown organization with a countless number of supporters who have saved thousands of animals by helping to transport them to the FS shelters in New York and California.

FS is in the middle of court cases against several farming companies about the mistreatment of their animals. Farm Sanctuary is fighting for stricter regulations and laws-- since there are barely any-- that will hopefully put an end to cruelty against the animals who have come to be seen as mere commodities.

Farm Sanctuary's site has a whole section detailing a range of current issues in the meat and dairy production industry-- from chickens crammed into pens and stacked on top of each other during egg production to learning about the industry term 'downed animals' (which describes animals who cannot stand on their own due to severe illness or disability). you can read more facts on 'the issues' page of the Farm Sanctuary website.

but-- if you'd like to be involved more personally, you can take part in Farm Sanctuary's Walk for Farm Animals this Fall-- an event that's been with FS since their creation in 1986-- taking place in locations across Canada and the U.S.!
*for our Canadian readers, walks are taking place in Alberta (Calgary - Sept. 17), British Columbia (Vancouver - Oct. 15), and Ontario (Ottawa - Sept. 24, Toronto - Sept. 24, and Niagara - Oct. 1).

for more info, check out the Walk for Farm Animals site,
or the Farm Sanctuary site / facebook page :)