three things you NEED to know about

ONE
Still Ships photography has officially hit the web! Niagara region visual artists Tracy Van Oosten and Barsin Aghajan push the boundaries of traditional photography to bring an artistic edge to each wedding and event they cover :)

please check out the Still Ships site and some of their beautiful past work here!
or contact them at info@stillships.com for a personal quote :)

also, here's a wonderful video Still Ships made for newlyweds Victoria and Jordan:


speaking of awesome Niagara region artists, the band Elk has also powered up their own great site!
Elk's new site helps you keep up-to-date with all their performance announcements, and how working on their latest record has been going :)

*a tune from the new in-progress Elk record will be included on the IndoorShoes Record Label compilation which you can grab at their one year bash:

THREE
IndoorShoes celebrates their one year anniversary with three days of amazing lineups!

check out the current lineup of IndoorShoes' three day extravaganza! :) 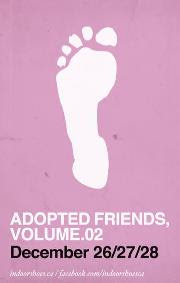 (by the way, info about dg's next call for submissions will be dropped next week!)
Posted by dead (g)end(er) at 2:58 AM