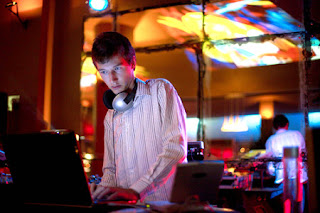 based out of Perth, Australia, Nick Bertke-- also known as Pogo-- has been creating tidal-sound-waves all over the globe. Pogo creates electronic music pieces by micro-sampling different films, which means he compiles his work with the distinct sounds, music, lines, words, or even tiny parts of each from a movie, and then mixes ('mashes') those sounds to create new compositions.

dg does not like categorization, but we're going to be sliding Pogo under the heading of 'sound artist' during most of this write up. what we mean by 'sound artist' is not simply someone who is extraordinarily talented with the creation of music, so much as we mean someone who creates art by focusing on aural stimulation / playing with sound to create an entirely new hearing experience. (you should know also that Pogo creates his own video mash-ups to go along with his songs, but dg is going to be focusing mainly on his use of sound.)

you might remember our discussion in tqc #three on Dan Deacon, and how complex the phrase 'sound art' can be. while I suggested then that Dan Deacon may be seen by most people as a 'musician', I also suggest now that Pogo may be referred to more commonly as a 'mash-up/electronica artist' as opposed to a sound artist; but, once again, 'sound art' is a layered phrase, and I believe Nick Bertke falls into either category.

how about I show you a Pogo piece, and you can decide for yourself? :)

the following is one of Bertke's better known works, compiled from the sounds of the movie Hook (1991):

not only is this piece an awesome composition inspired by one of my favorite movies of all time, Hook demonstrates the complexity of the phrase 'sound art' while also introducing the complexity of another not-so-unfamiliar concept to artists: copyright infringement-- the two most irritating words a writer or artist can hear.

well, guess what happened to Nick Bertke? after the release of the Hook piece on YouTube, Sony Entertainment put so much legal pressure on YouTube that the video soon just 'disappeared' from online existence. little did the suits at Sony know that nothing goes totally erased on the internet, and just as soon as Hook disappeared, it reappeared from Pogo-fans who uploaded their own versions of the video in protest. (the original Hook video eventually returned-- much to the probable annoyance of Sony Entertainment.)

Pogo has since become a sound art sensation, producing tracks based on the show Dexter, the movies Up! (2009), Harry Potter and the Sorcerer's Stone (2001), and even Terminator 2 (1991), among several others. Bertke also supposedly has some never-before-seen songs based on Casablanca, Star Wars, and Pulp Fiction! (Source.)

here's another favourite track of mine that blends several Disney movie bits together to create the song 'Bloom':

Bertke's work could definitely be seen as what composer John Oswald first called 'plunderphonics' (the sampling and altering of recorded audio to produce new works). you can read Oswald's article, "Plunderphonics, or Audio Piracy as a Compositional Prerogative" here-- a totally recommended read if you're into learning more about the 'copyright struggles' of plundering music.

Canadian poet Gregory Betts beautifully explains the idea of 'plundering' in his article, "Plunderverse: A Cartographic Manifesto", and while Betts is discussing poetry and literature, I believe he also helps to explain Pogo's musical desires, as well:

"Plunderverse limits its own expression to the source text, but attempts a genuine, divergent expression through the selection, deletion or contortion of it. Plunderverse makes poetry through other people’s words. The constraint is not random, but merely an accelerated variation of the basic fact of language: we already speak in each other’s words. Plunderverse exaggerates the constraints through which we realize and discover our own voice, re-enacting the struggle against influences and cultural histories. It does not try to obscure, bury or overcome influence, but, in fact, celebrates the process by which influences vary into and inform our own voices. It foregrounds the process of language acquisition, reveals the debt of influence and exploits the waste of language." (Source.)

Bertke is using the source 'text' (film/show/song) as inspiration for creating his own unique voice and style.

the last couple years have seen a major evolution in Bertke's work: "The next project he [Pogo] will engage in takes his concept of fragmented clip sequencing and moves it from the studio to the outside world. He has dubbed it, The World Remix Project. What the project sets out to accomplish is to continue the trend of sampling random bits of sound, but instead of cropping movie clips, he will be recording sounds from a particular culture to compile them in way that should reflect the ethos of that place in the world." (Source.)

The World Remix Project kicked off after Pogo had the idea to create a track based on the sounds of his mother gardening! take a listen to 'Gardyn':

you can watch Nick talk a bit about himself and The World Remix Project here.

Pogo explains, "If I can capture my mother’s personality and passion in the form of a track and video… what’s stopping me from doing that around the world? Perhaps I could capture a day in the life of a family of Inuits in the Arctic, tribes in Africa, temples and monasteries in Tibet…”

Pogo soon kicked off his World Remix Project with the well received Joburg Jam, which remixes the typical sights and sounds of Johannesburg, South Africa!

Pogo is the perfect example of the alternative, unique, original, and homegrown/indie art style dg is so madly in love with :)

if you'd like to know more about Pogo, or listen to more of his songs, you can visit his website, PogoMix, or his YouTube channel, Fagottron.

here are some articles that helped me to write this edition of the qc:
Would you like a sample? by ilictronix
Pogo's . . . Plans to Remix the World by Kevin Holmes
Pogo Presents World Remix by Nick Bertke
Plunderverse: A Cartographic Manifesto by Gregory Betts
Plunderphonics, or Audio Piracy as a Compositional Prerogative by John Oswald
Posted by dead (g)end(er) at 1:01 AM